The Role of Weighing Equipment in Microbiology

The microbiology field has seen considerable growth and its knowledge is used in various industries, from environmental cleanups to cultures for cheese and yogurt, understanding how organisms interact and industrial processes. Moisture analyzers, analytical and semi-micro balances are important tools for carrying out tasks in microbiology. We’ll look at weighing performed in routine microbiological applications and which features can streamline work.

If you’ve ever grown bacteria in a lab for work or school, you might remember using petri dishes filled with a gel-like substance. This is the media, in which bacteria will be grown. The media can be bought pre-made, but that can be expensive and is specific to certain cultures, which is why many laboratories make their own media recipes.

A key component of media preparation is agar. Agar is a polysaccharide (meaning a carbohydrate formed from sugar molecules bonded together. Poly = many, sacchari = sugar, ide = suffix meaning nonmetal anion) derived from algae. It solidifies media and gives it that gel-like texture. It’s used because it only melts when heated to boiling temperatures, but it stays melted until cooled until 42C. Why is that useful? Because scientists can fully dissolve components in the agar to make the media of their choice. Another useful characteristic is the fact that it does not get eaten or degraded by most bacteria, so samples can be controlled efficiently. 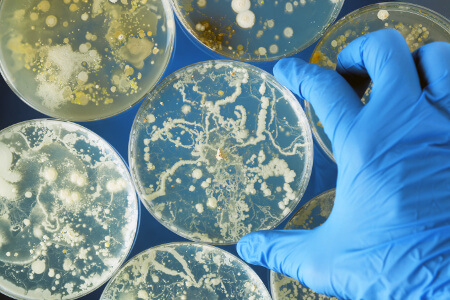 Once the agar is completely dissolved, other ingredients (like peptones, massing reagents, yeast and broth powder) can be added. They’re usually solids in powder form that must be dissolved in water. There is a wide variety of recipes and types of nutrients depending on the type of bacteria that will be cultivated. They must be weighed precisely in order to follow the recipe. Furthermore, some reagents can react differently to other substances, and because the media will be heated to a boil, it’s important to measure the right quantity, or else the media could boil over and spill. The dry solids often get weighed in succession, so you can keep adding dry ingredients with the tare feature before mixing them.

Pipettes are used to dispense various liquids during formulation and compound creation, so it’s paramount to ensure that they dispense the right amount. It also helps ensure repeatability and accuracy, and of course, can be required by various organizations like ISO. For a guide with instructions on calibrating a pipette with a balance, click here. 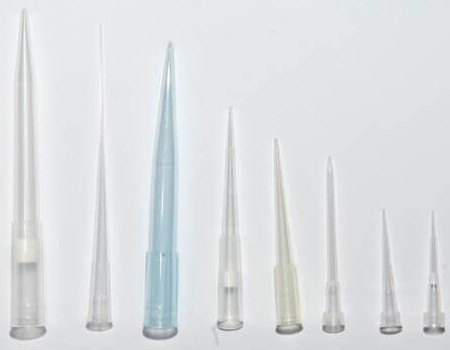 Microbial biomass is a fundamental variable used in microbiological research. Expressed as dry weight, it allows researchers to ascertain factors such as growth kinetics (the relationship between bacterial growth and substrate concentration), yield factor (the weight of the bacteria that has formed), and metabolic quotients (essentially, the flux of CO2 produced by bacterial respiration). All these are paramount for analysis, research and general advancements to make processes more efficient. A commonly used method is to dry the samples in an oven, with measurements before and after taken with an analytical balance. Moisture analyzers can also be used, though the oven method remains prevalent despite its time-consuming process because moisture analyzers do not always have fine enough readability. The right moisture analyzer (like our PMB) can considerably streamline the process by reducing drying time and allowing researchers to create custom tests designed to dry specific samples. 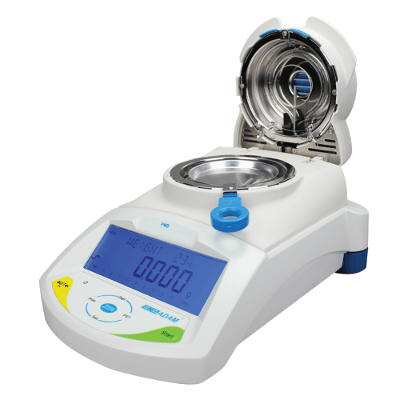 From food to cosmetics and medication, samples are often tested for bacterial contamination. It’s important to measure quantities specific quantities to get accurate results, especially since multiple smaller samples are better for testing that a single big sample. Depending on the sample type and the bacteria tested, the samples sizes can be regulated and require specific amounts to be tested for the test to be legally compliant. Some foods, for example, must be blended, mixed or crushed and measured again after processing. Then sample is then mixed with various components (such as yeast) and the finished mixture is incubated and tested for microbial growth.

Which features should you look for?

Acute precision and excellent accuracy are essential, since the quantities studied can be very fine. A formulation feature, as well as percentage weighing, can be very useful when creating media, especially if the balance lets you store the recipes like our Solis analytical balance does. A preset tare feature, included in Equinox analytical balances, can speed up tasks that use the same containers. 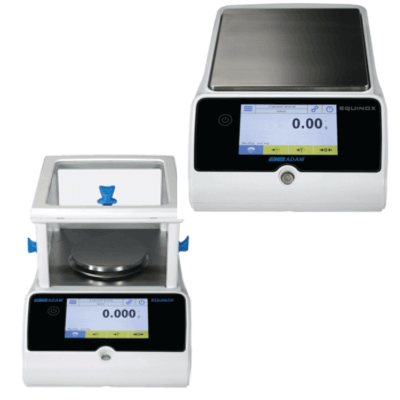 Automatic calibration can be very helpful, as the balance will calibrate itself if it detects ambient changes like temperature. If the samples are very fine and weighed as powders, a draft shield can minimize displacement during weighing. Data communication and exporting data to software while following GLP guidelines is possible through RS-232 and USB interfaces, so it’s worth making sure your balance can export data to various software.

Most laboratories have specific requirements regarding calibration, readability, certificates and other specifications. Make sure your balance is compliant with these requirements. Don’t hesitate to contact us if you have questions.